Rescue all of the civilians

DuPlessis Wholesale Diamond Center is the eighth mission in SWAT 4 and the eleventh mission in SWAT: Elite Force. The SWAT team is needed for a hostage rescue mission after a group of heavily armed gunmen broken into the DuPlessis Diamond Center. They used a van to ram the main door which immediately triggered the alarm. The assault was not a coincidence as the vault contained ready gems which could be sold. No one of the employees left the building which means there are a lot of hostages inside and some of them might collaborate with the suspects.

We have another tough one. Just before closing time, the DuPlessis Diamond Center was broken into. The suspects drove a truck through the main security doors into the lobby. The building’s alarm was triggered immediately. Witnesses report multiple suspects, armed with machine guns and wearing body armor, entering the building. Witnesses also report they have seem any of the wholesale’s employees exit the building, although it was still open and security personnel were on duty.

The DuPlessis office building is built much like a small fort. Most areas are under constant video surveillance. A separate security system and metal detector guards access to the vault. The vault door has a time lock; it locks at 18:00 every night, and can’t be reopened until office hours start next day at 09:00. Note that alarm company has disabled the time lock on the door for us, in case the gunmen are hiding inside on it. The building’s phone lines were disabled by the suspects.

DuPlessis is a wholesaler; they deal mainly in raw stones. This means they haven’t been cleaned or cut, and they also aren’t registered. However, they’re harder to move; you can’t take these down to the local pawnshop. This week, DuPlessis was holding a shipment of finished jewels. I don’t think the thing is a coincidence. Our suspects probably have ties to black market purchasers outside of the country, since even the finished gems are a lot of gems to move.

Our suspects have automatic weapons and body armor, so they’re ready to fight. We don’t know how they intended to breach the vault, which should have locked automatically when the alarm went off. One possibility is inside help, so stay on your toes. Most, if not all, of DuPlessis employees are still inside. We don’t know their current condition. Study the floor plans, choose your entry and plan your assault but don’t take too long.

Two snipers are available in this mission. Sierra One and Sierra Two are monitoring two offices on the second floor both on Side 1. 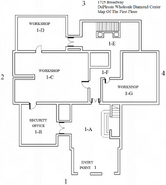 Map of the first floor.

Map of the second floor.

Map of the basement. 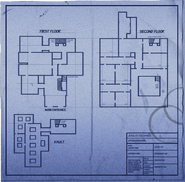 Map from briefing.
Add a photo to this gallery

DuPlessis Wholesale Diamond Center is a three story building and it has been built like a small fort. The whole building is under constant video surveillance as there are metal detectors and trained security guards who protect the vault and jewelry from any theft. Also the whole building, apart from the security, has a sophisticated interior design, such as expensive appliances, pictures in every office or display cases with jewelry. The first floor has been designed for several showrooms where raw stones are being cleaned, cut, weighed and kneaded for precious jewelry. All of those rooms contains various appliances such as scales, microscopes, grinders needed for work as well as portfolios for ready precious stones. The front lobby of Duplessis Diamond Center contains metal detector and reception desk. Also the front doors are protected by heavy metal grids. There is also security office with multiple screens and a staircase. The second floor has been designed for luxurious offices. All of these offices contains various pictures with Africa and its natural resources, expensive alcohols and showcases with jewelry. Apart from these offices there are also meeting room and the president's office which is even more luxurious. In the basement of this diamond center is the large vault with multiple safes where ready jewelry is kept before it can be sold for example to jewelry stores in country or abroad. The Vault door has a time lock; it locks at 18:00 every night and cannot be opened until 09:00 next day. There is also additional security office. As this building deals in selling and light sanding there are various advertisements associated with jewelry such as necklaces, rings or earrings as well as types of precious stones such as diamonds. 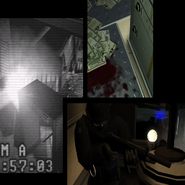 A banner in front lobby.

An advertisement inside the diamond center.

One of the luxurious offices.

One of the luxurious offices.

A banner in front looby.

A showroom where employees work on raw stones.

A showroom where employees work on raw stones.

Another showroom where employees work on raw stones.

A showcase with jewelry.

An advertisement inside the diamond center.

A hallway on the second floor.

A picture and antlers inside president's office.

Diplomas and jewelry bust in one of the offices.

One of the luxurious offices.
Add a photo to this gallery

Retrieved from "https://swat-4.fandom.com/wiki/DuPlessis_Wholesale_Diamond_Center?oldid=1821"
Community content is available under CC-BY-SA unless otherwise noted.